The RhythmXChange Festival, a collaboration between the Indian Music Experience Museum (IME) in Bengaluru and Manchester Museum at the University of Manchester hits Bengaluru this November. An outcome of a British Council grant that shaped a year-long RhythmXChange project between both institutions, four young musicians from India and the UK who were part of a mentoring programme were brought together for the project to explore rhythm as a shared language between East and West. The three-day festival is slated for 25-27 November at the Indian Music Experience Museum, and will debut collaborative works like J.A.V.A. – The Cadence Collective and include acts such as Ta Dhom, Laya Lavanya, Pardafash, and Sthree Thaal Tharang. Tejshvi Jain, Partnerships consultant and Sarvar Kahlon, Events & Public Programs Coordinator, from IME, share highlights about the festival and the collaboration. Edited excerpts:

What is the Indian Music Experience Museum?

How did the partnership with Manchester Museum come about, and what were some of the highlights of this exchange?

IME has worked with the Manchester Museum for online panel discussions during the pandemic. When the India-UK Season of Culture grant open call was announced we instantly thought of the Museum to work on a collaborative cross-cultural music festival. Titled RhythmXChange, this collaborative project seeks to explore rhythm as a shared language between East and West. As part of the year-long project, four young musicians from India and the UK took part in a mentorship programme. Mentored by established musicians and music producers from India and the UK, these musicians worked on collaborating and developing a rhythm-based art project, J.A.V.A – The Cadence Collective.

Is this the first year of your programme, and if so, what inspired you to create RhythmXChange?

We wanted to explore how rhythm and other music traditions travel across borders, specially shared forms like vocal percussion that are common to the East and West but differ considerably given the cultural contexts. The possibility of bringing together four young musicians from Bangalore, India and Manchester, UK to work with mentors to create a new percussion-based project was very exciting to us. The focus of the project was always to give the young musicians autonomy, develop their global networks and to co-create a cross-cultural, youth led music festival which we’re hosting at the IME in India this November and in Manchester Museum in the UK in March 2023.

What can visitors expect to look forward to at the RhythmXChange Festival? I.e What are the highlights of the festival?

Besides the premiere public performance of J.A.V.A – The Cadence Collective visitors can look out for an interactive unique percussion-based themed Museum Walkthroughs curated by our experience volunteers. Enthralling performances by young artists from around the world, a rap battle organised by India’s first Museum Youth Advisory Board, panel discussions and a screening of Dollu, National Award winner for Best Kannada Film.

How do you create contemporary experiences for your audiences using traditional instruments and sounds?

The concept of the RhythmXChange project itself was to explore how different musical forms interact with each other, so the presentation of traditional forms in a contemporary context is built into the project. For our young mentee, Aditi B Prahlad for example, who is a trained carnatic vocalist, this was her first experience of working in a collaborative “fusion” format with other musicians. In the festival lineup as well we have curated folk performances, carnatic hip-hop, carnatic fusion ensemble and a rap battle into the programme so audiences get a chance to experience traditional instruments and sounds in a new context. We’ve also taken the performances out from the traditional space of an auditorium to the terrace of the museum building and under the starlit night sky.

Who is the intended audience for RhythmXChange?

In India, RhythmXChange Festival is for young adults and people who love fusion music. People who are willing to listen to traditional art forms with different flavours (either of a different musical tradition or a contemporary twist to traditional music).

How do you hope your programme will impact the cultural landscape of Bengaluru in the future?

IME’s intention with any of its music festivals and presentations is to bring people together through music. With RhythmXChange Festival, our hope is to bring together different musicians and performers together in one festival to have the space to interact and present their work together, which they would not normally have the opportunity to do. Apart from the performances we’ve also included some important conversations around music that we feel are important to have, like the Women Percussionists in India panel that will explore the challenges women percussion artists face in traditional male-dominated fields.

What are some of the challenges of organizing an international festival in light of the travel disruptions of the past two years?

Working on a project like this, especially remotely for a majority of the time is always a challenging experience. Bringing together four young, relatively less experienced musicians to collaborate and perform together can also be challenging. It’s not always possible to predict the outcome, but we couldn’t be happier with the outcome and the music they have created. One thing that worked in our favor was that given the pandemic, artists had become accustomed to working online. As for travel restrictions, we were worried about getting visas for the UK contingent to travel to India in time for rehearsals and the festival, so we had to apply months in advance. We were all on tenterhooks while the applications were being processed, but thankfully it all worked out. Now we’re on tenterhooks for the India contingent visas applications, given the backlog of UK visas.

What is one unique aspect of RhythmXChange Festival that audiences cannot experience anywhere else?

The uniqueness of RhythmXChange Festival is that it brings different forms of music like rap, carnatic music, folk, electronic music, jazz together in one festival without traditional genre-based restrictions. 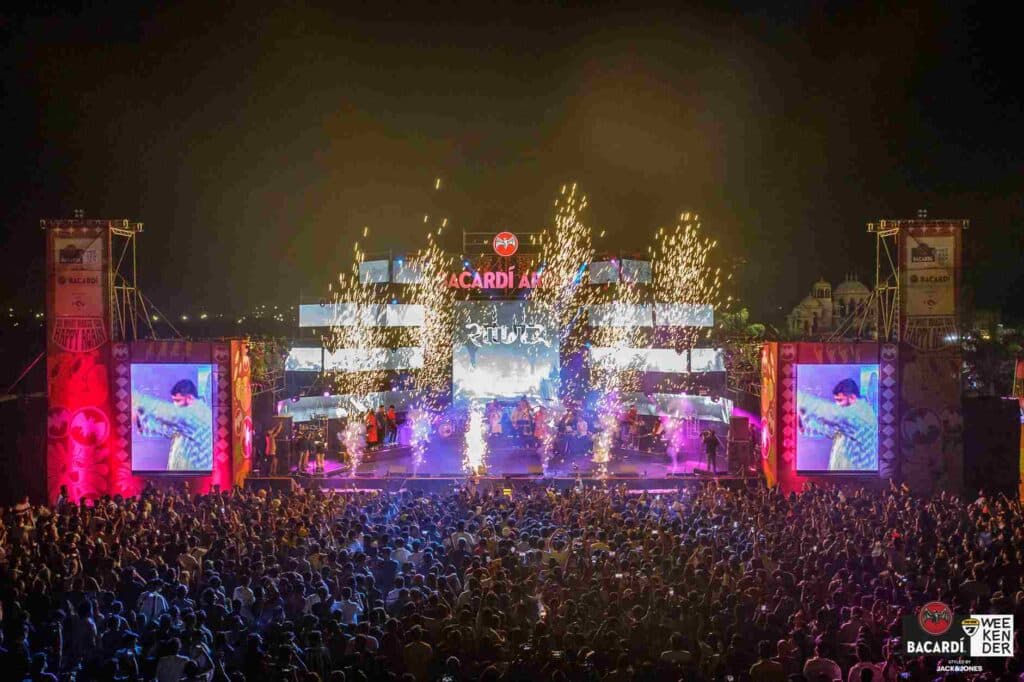